There was still thirty odd kilometres to go, so I wanted to leave early – even though yesterday was such a huge day.

I woke up at 5am (not as early as previous days, but we were hiking until past midnight!) and tried to wake the others but they were having none of it. It was only a quick moment of indecision, but I knew I should set off before the sun came up, even if the others preferred to sleep in. Coffee was first on the list, so I boiled a ration of my water, rolled up my sleeping pad and set off with my little take away cup.

It gets hot a lot faster than it cools down in the desert.

Because I was alone, I plugged in my headphones and sang away to myself and the mountains.

The mountains, that went on and on. And on.

Every rise, every corner, seemed to give way to another crest or another mountain I would have to walk around. And another.

Singing helped pass the time as I wound around and up the range.

I was so deep in my own world that I was surprised when I heard a bush rustle it actually got my attention. I glanced back and my heart nearly jumped into my throat as I eye balled a rattlesnake less than a metre from where my feet had just been.

So apparently it wasn’t a rustle. It was a rattle.

I slowed my breathing and took a photo, but wasn’t game to get much closer. Man, they blend in well! 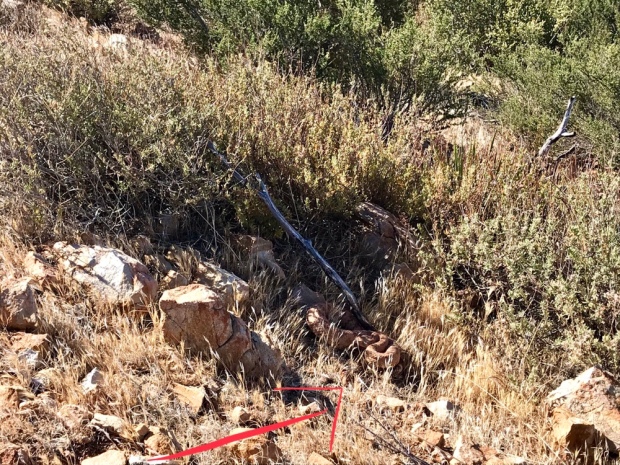 I must have jumped at every little sound for the next hour, at least. It was certainly a fair while until the monotony of the mountains lulled me back into my music, but it did happen eventually.

Today was another hot one.

I’ve gone through a bottle of sunscreen in four days. It’s crazy to think back a week ago when I was tossing up if I would even bring any. I don’t usually burn, and I’ve come from a pretty nice summer in Lennox, so I figured my skin would be okay – it generally is.

The sunscreen has saved me though.

I lather it on hourly. Sometimes, more. This dry heat feels like it’s baking my body, and it’s not just UV coming down from the sky – it reflects back up from the sand, rocks, and land all around me.

Tomorrow in town I’ll have to buy a bigger bottle with higher SPF just to be safe. I also need thongs (flip flops), batteries, electrolytes, and more two minute noodles.

The temperature today peaked at 41’C, and while I had fun singing and dancing, and was plenty hydrated, I knew the heat was affecting me. A beautiful, heartwarming surprise was finishing one crest and seeing a bottle of water sitting at the top. Someone had Sharpied on there: The desert is a drug. You cannot beat the sun. Take only if desperate.

I didn’t need any, but I was glad for the others behind me who might.

There was another corner I turned, and someone had dropped off 30 GALLONS of fresh water for hikers. The level of generosity out here continues to blow my mind.

I was standing at the highway looking left and right, trying to decide if I wanted to head left into the town of Julian for supplies, or right to Stagecoach RV Park to set up my tent and swim in their pool. Lucky for me, I didn’t have to make the decision – about 10 seconds after looking each way up the highway, a van pulled up in front of me.

A man climbed out of the car with a big smile and told me I wanted to go with him to the RV Park.

It wasn’t a white van, so I trusted the guy.

And there were four other hikers I recognised in the back already, so I figured, “What the heck?!” and jumped in.

Stagecoach Park was a great idea after all – there were power outlets, air conditioning, that pool, and ICE CREAM!

The moment deserved a selfie.

When I checked the photo, I had a bit of a rude shock:

Like, so dirty. So, so insanely dirty. There were tracks down my arms and neck made from all the sweat running through dirt. My fingers resembled sausages more than hands. I hadn’t seen my reflection for a while, and had no idea how much grime accumulates in just one day on the trail. The wet wipes gave me a little idea, because they were always so disgusting, sure, but I hadn’t actually seen it. I’m still a little in shock, and will have to apologise to waitresses and campground workers whenever I talk to them now, in case I scare them away.

The shower I had here, I went in clothed, and just watched the dirt run off me down into the drain, still surprised at the amount I’d collected across the day.

My clothes are clean now (after a good soaking and scrubbing) and my fingers look like fingers again.