I was told that women who finish the PCT come out looking like gymnasts (and the fellas end up looking emaciated… life is unfair sometimes). While I’m still waiting for my legs to thin out that much, I’m fairly certain I won’t be doing the splits too gracefully now or later – despite how thin my legs might get. This is what my inner thighs have become: 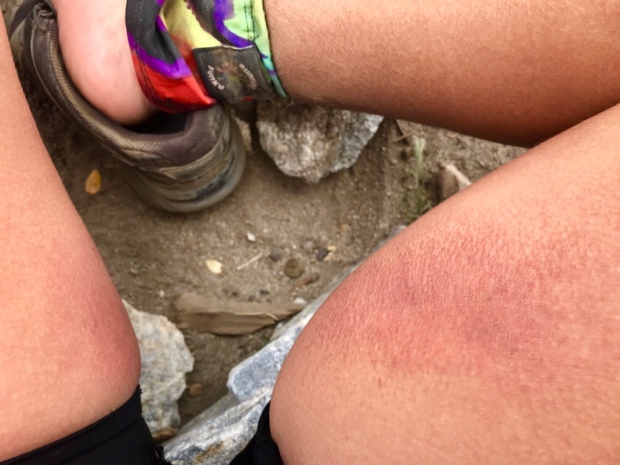 On the bright side, those weird hard scales mean that I can’t feel chafing nearly as much anymore? And I’m not here to impress anyone, so, so be it: scaly thighs it is. 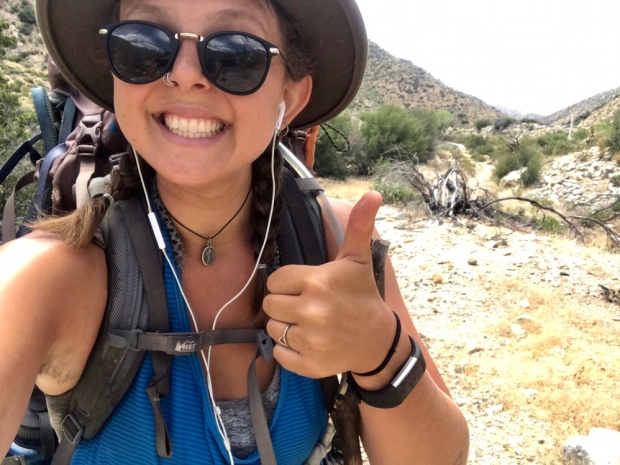 In other highlights of the day, I had my first taste of creek crossings. We followed this one for miles; criss-crossing back and forth over the water. My senses were jolted back and forth, too, as my surroundings went from green fairy land to hot, dry dust over and over again. 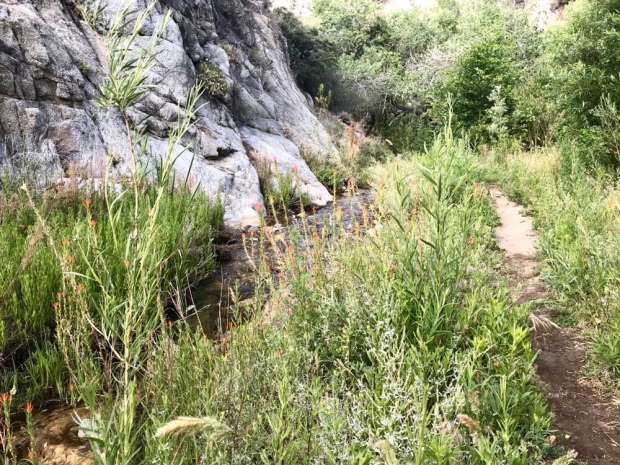 I’ve often thought about the dust as I walk over it. How many other feet have walked this path? Is that why it becomes sand? Because countless steps have been taken over this same trail, grinding it finer and finer?

I often have random rhetorical musings as my mind follows my feet and meanders along. I don’t generally expect or want any definitive answers – I just let my mind wander as I walk. This time, however, I did get an answer, and one I didn’t see coming: 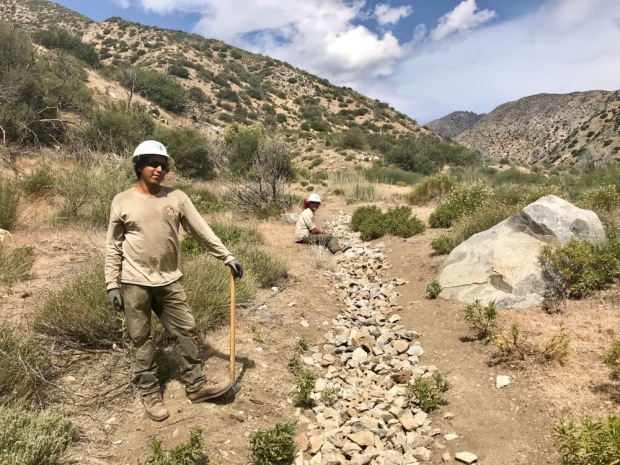 The PCTA (Pacific Crest Trail Association) has workers who hike to various parts of the trail, scatter rocks down and crush them with sledgehammers. Not even kidding. What a job!

Lunch was tortillas with Vegemite – so it also doubled as midday dessert, for me. I’m trying to ration out the tube to last me longer but I’m one of those people who likes a LOT of Vegemite, so I doubt it’ll go too much further. 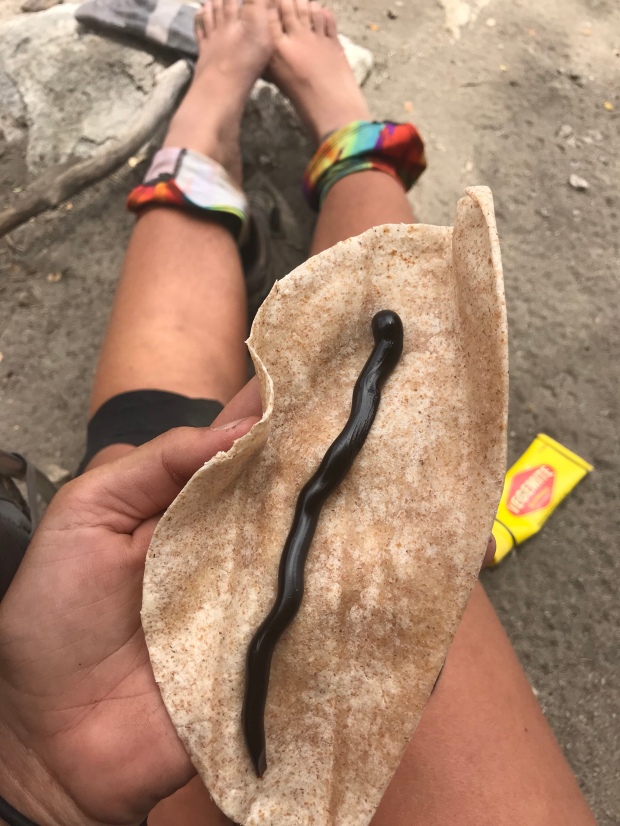 Across the course of the morning, I’d been sweating. Big time. Like, more than I did back when we had that 39’C day, and today’s temperature was less than half of that. While talking to those rock crushing fellas, I mentioned it, and they thought the humidity meant a rain front was coming in. There were a few ominous clouds lurking on the horizon… and they got bigger. And darker.

Have I mentioned lavender before?

Or have you noticed it in the photos?

Because there is lavender EVERYWHERE along the trail. 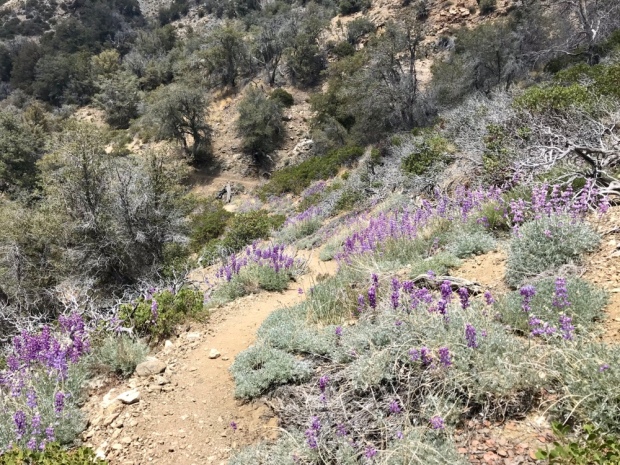 It is stunning, and smells refreshing and comforting, and surrounds me with pleasure.

I was especially feeling comforted and happy when I turned one lavender filled corner and realised those clouds had dissipated into little wisps. 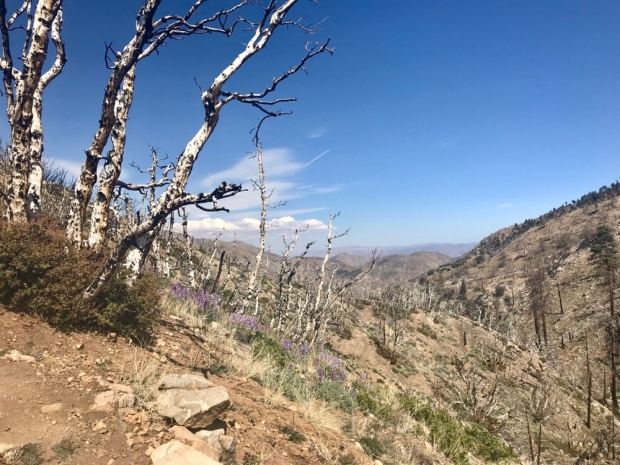 I still get scribbles if encouragement from friends ahead of me.

WW = Warrior/Wizard. And although I prefer Warrior (it sounds tougher), we all know with me toting my Gandalf staff, Wizard will be the name that follows me. And the Wizard of Oz makes sense.

Other people get creative with messages too:

Being on trail is fun, on so many levels.

I get to (try to) eat around 3,000 calories a day and I’m promised that I’ll still lose weight. I get to make friends with hummingbirds and rattlesnakes and humans and even myself. I get to thank Jesus for the views, the energy and ability to walk, for sunrises and sunsets and even for chainsaws. 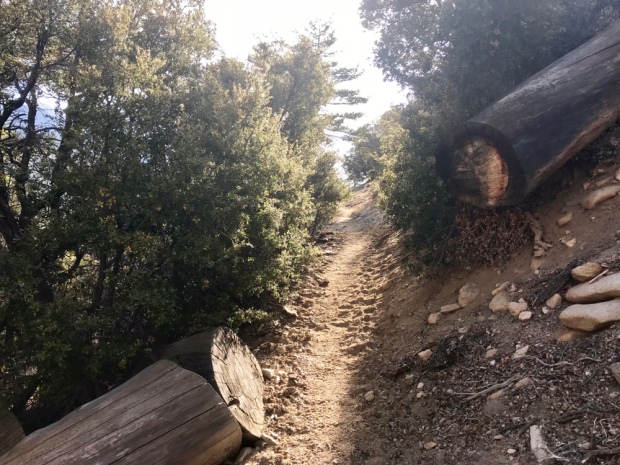 I also get to thank Jesus for angels – like tonight, when we made camp in a very likely haunted cabin. This place was creeeeepy. No windows or doors, a corrugated iron roof that wasn’t completely attached, stone floors and fireplace, carvings scratched into the walls. It was Blair Witch Project and then some. 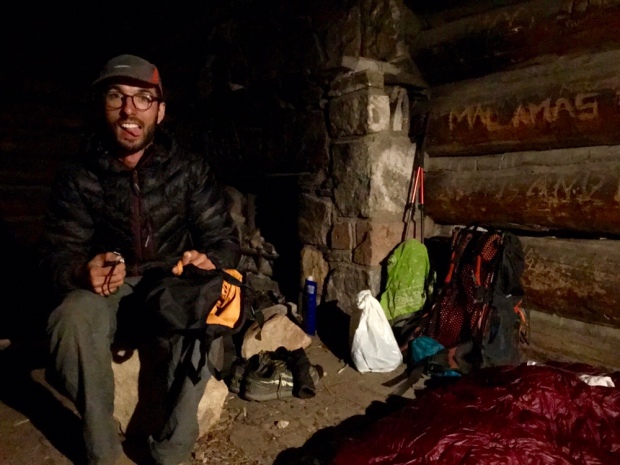 Kevin (a cute American kid I call Kevin07/KRudd/Big Fella) actually refused to sleep inside because it was too creepy for him. And I thought he was tougher than me.

The weather on top of the ridge where we were was pretty chilly: a low of -1’C up there, but he still refused to sleep inside because it was that creepy.

Thank you Jesus again for those angels; tonight I’ll take my chances with them in a haunted cabin over freezing to death outside. 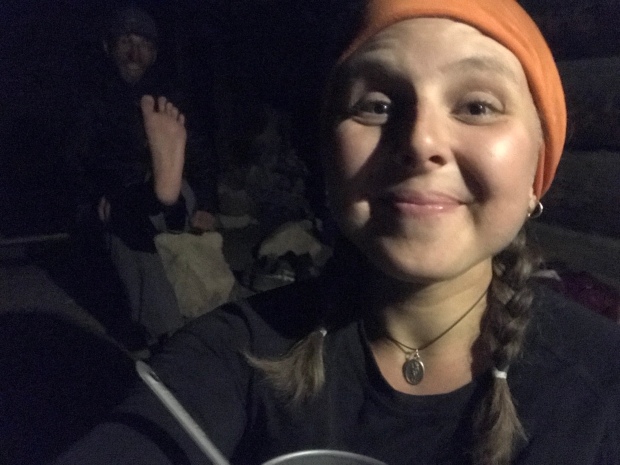