Yeeeah… I had every intention of leaving early.

But it was freezing outside..

So I may have taken two hours (totally did) to get my act together and start the trail 🙊 Macca’s generally has all day breakfast anyway, so here’s hoping my slowpoke movements wouldn’t cheat me out of hotcakes.

It’s a little hard to see, but to the right we have the direction I came from, with the lake I stayed by and a LOT of green. To the left – the direction I’m heading – there is brown. Again. More desert mountains.

More reminders of home, too though, with patches of green and gold everywhere I turned.

And then came the view.

Probably the best view I’ve had so far.

I could see Jeff stopped just a little ways ahead of me, but the rock face on my left meant I couldn’t see what he was looking at until I was nearly on top of him. The land opened up to this: 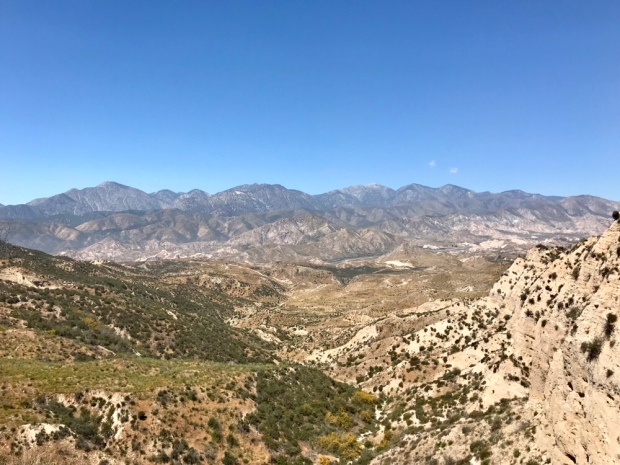 Again, these pictures don’t do the view justice. It was just so beautiful.

I’m not actually sure if I have to climb those mountains in the back there (and trying not to think about it), but this has got to be my favourite place to look at so far, and I’ve seen a lot of places along the way.

I do have to wonder if it was the promise of McDonald’s at the foot of those mountains that made it all the more beautiful. 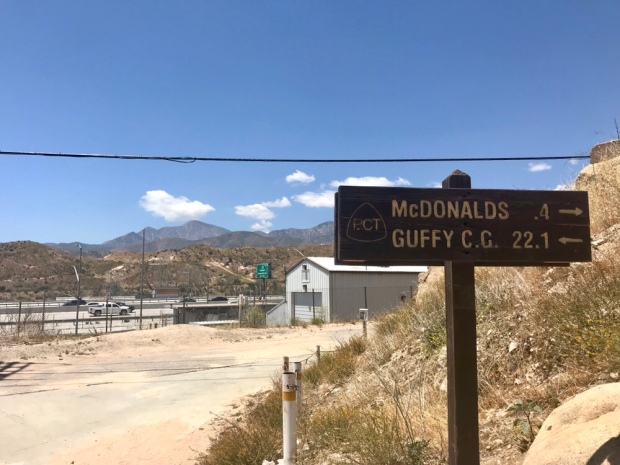 It certainly put a pep in my step.

I was the first to get there out of those who stayed at the lake, but was greeted by others who had been there the night before and stayed in town. This has got to be one of my most favourite parts: having people I thought were long gone pop up in random spots.

At Macca’s, I found Mass (he comes from Massachusetts, hence the name). He was literally the first hiker I met – we picked him up at the airport straight after I was picked up at the train station. I’ve never actually walked with him, but bumping into him in unexpected towns or restaurants is almost more fun anyway! We were swapping stories back and forth, and I told him one I haven’t exactly mentioned to you guys (sorry Karen, didn’t want to worry you)…

“You’re typically two-three days ahead of me, yeah? Did you hear about the mountain lion?”

“Wait, are you serious?”

“Yes! It would have been just as you were coming through Idyllwild, because it was two days before I walked into town – the ranger shot a mountain lion that had been stalking a hiker!”

And then I made him give me every single detail and I told him all I knew about it.

Apparently, Mass had been hiking (yep), and saw a shadow just ahead of him – the mountain lion mumma was charging straight at him! We’re told if this ever happens, try and scare it off: wave your hiking poles in the air, yell, scream etc. He kept it together enough to do exactly that, and thankfully it worked. He had to report it to the ranger (obviously), but didn’t realise that they tracked it down and killed it the next day. The ranger told him it could have either been territorial or defensive, if it had babies nearby, and that if it had come from behind him he wouldn’t have had a chance.

So when I talk about mountain lions, I’m not kidding… They really are real, and they’re right here.*

In between my incessant questions I somehow finished my first hotcakes order, with hash brown and shake, and Mass left with another hiker chick Ellie to start the climb to Wrightwood.

The Hong Kong Four had come in at some point – my eyes were so wide at Mass’ story I’m surprised I didn’t see them – at it was Katrine’s birthday, so we sung her a loud Happy Birthday. We’re planning on celebrating someone’s birthday at every stop now, because the manager brought her over a sundae and cookie with a candle. Yay for birthdays! 😉

I have one more story from McDonald’s (it was a very eventful five hours I spent there).

Some sort of commotion was happening inside the ladies bathroom.. There was a line out the door, a manager coming in and out and we were all very curious. Sitting with Kevin07 and Speedy, I was really the only one with a chance at finding out what was happening, so joined the line and went in.

A little old lady had got stuck. The door handle wasn’t working, and she was locked in. She wasn’t freaking out, bless her, but she had been in three for quite some time by the sounds of things.

The manager had gone and found the smallest chick working the shift, and I watched the poor girl shimmy under the toilet stall door and have a screwdriver and spanner passed to her – only to ask back over the door what she was supposed to do with them. Did no one check that she could use a screwdriver before sending her into the cubicle with the lady?!

I put my hand straight up 🙋🏼‍♀️

My sisters and I used to muck around in Dad’s shed when we were younger, and manual stuff like this tends to make sense to me – so I offered to go in and fix it.

The thought did cross my mind that I’ve never had to fix a door handle before and literally had no idea what to do, but the next thought replaced it almost immediately: what a good story this is going to be.

The manager was lovely, and a bit hesitant at me getting down on the floor to crawl under the door. I assured her it was fine; I’ve been wearing this snazzy blue singlet and bike shorts combo for four days straight. It wasn’t going to get any dirtier than it already is.

I got down on my back and slid under the door. The lady was a sweetheart, and holding it together pretty well. I jimmied the handle back and forth, played with the screwdriver a little and the door swung open in about 10 seconds flat – with me looking like a hero/genius (but honestly, just having got lucky).

McDonald’s on trail was pretty unique.. So before we left to keep hiking, I downed another serve of hotcakes and coffee. 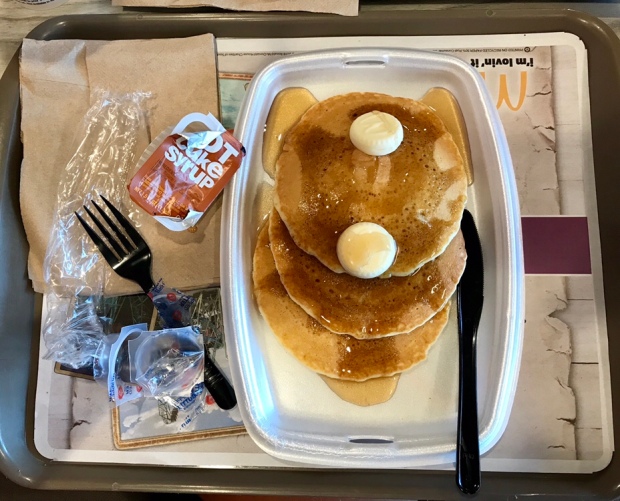 And because I’m all about too much information here and sharing the whole story: I’ll admit that I also had a cheeseburger happy meal and another shake while I was there. Don’t judge me. I’ll walk it off this afternoon, no doubt.

Talking about walking, this road we’re heading down is the ‘Historic Route 66’. Doesn’t mean much to me, but I’m sure it’ll mean something to some? 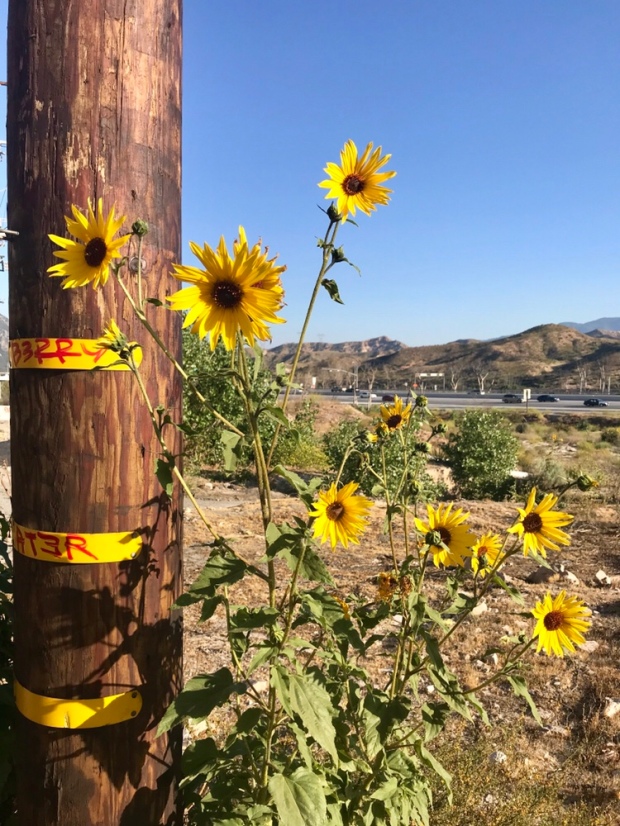 We had to go through a pretty big, dark tunnel to get to the other side of the highway.. and HK4 thought there was no one better than a tough Australian to go in first. 😳

We all survived the pit of blackness, and came out to more lavender and flowers and green grass and scribbles in the sand from Speedy. 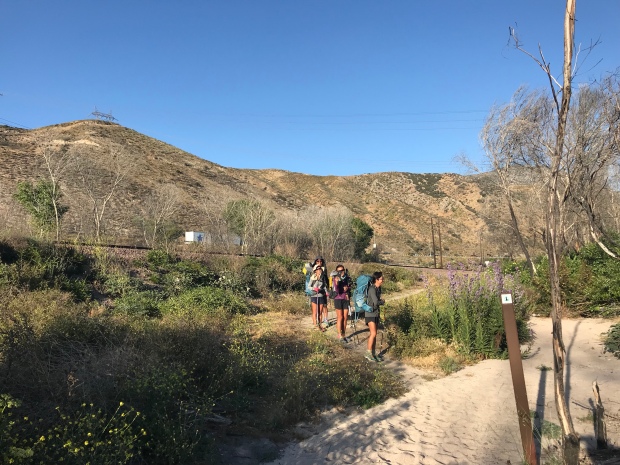 I think tonight’s the full moon.

It definitely looks like it can’t get any bigger.

And I believe that tomorrow we will be heading up into those mountains I saw earlier today.

I’m kinda tired after such a big day, I think I’ll just accept that I won’t be getting up early and not fight an alarm… We’ll see.

*Still doesn’t change my theory on cowboy camping: if it wants to eat me, tent walls won’t matter. May as well see those stars! ⭐️😴