The record has officially been set: six bugs.

Six bugs that I inhaled.

They’re little tiny fruit fly type things that get all up in your grill, and when you’re walking up some pretty steep never ending elevation and puffing and panting and trying to make your legs work, continually swatting them away gets too much. I really didn’t mean to breathe in so many across the day though. 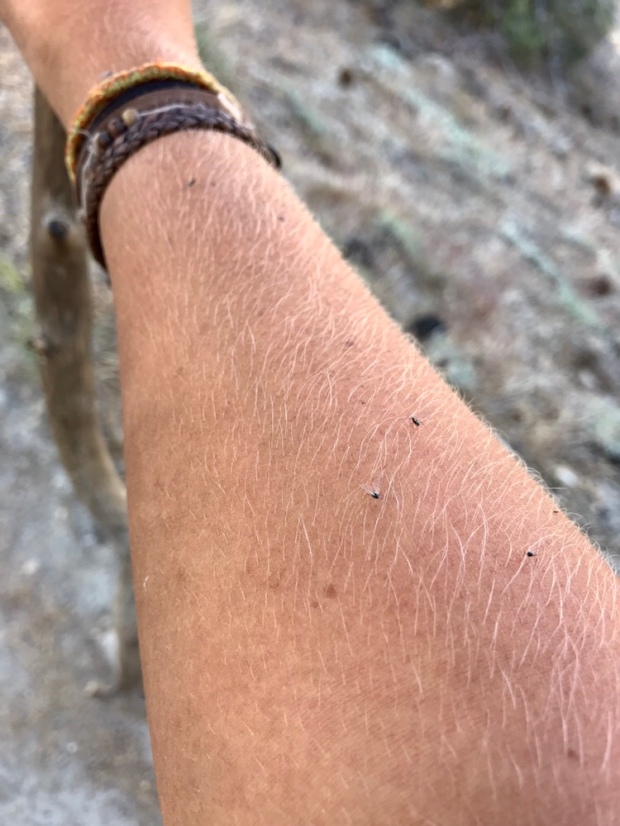 It was a hard climb, too.

When I was younger, I got chronic nose bleeds. I’ve been in hospital a couple times to try get it fixed, but from baby to teenager I would get them pretty often, and pretty bad. I haven’t had one in maybe several years, but here I’ve started getting nose bleeds every other day. It might be the heat? The dryness? The strain on my body? I’m not sure, but today I got one that rivalled any from my last decade.

It hit with no warning and I only realised when I felt the drops on my leg. Somehow none hit my shirt?! But I’ve dealt with nosebleeds for a lifetime, and knew I could just keep walking and it’ll sort itself out. 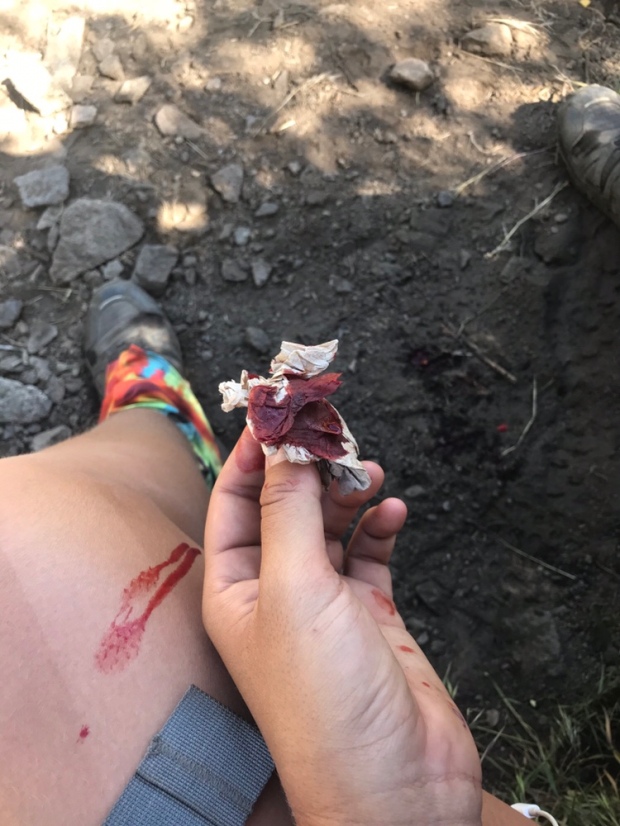 Only problem was, I had just started a day of climbing, and it was 9AM – and getting hotter.

Also, yes. I started late. Like 8:30AM late, but I deserved the sleep in. Next time I’ll remember I deserve the early wake up; future Naomi will thank me.

My first tissue disintegrated within minutes, and I was forced to stop. Again, that whole two decades worth of nose bleed experience was actually a blessing. Taking off my pack, opening the top, and rifling around to find my other tissue was doable with only one hand, because I’ve had so many times life went on as I held my nose.

Only carrying two tissues and being a day out of town meant two things:

I went with the option of sitting, letting it bleed out into a nice big puddle on the ground and finally blowing out the gunk when it slowed down enough.

My towel square was dipped in my water, and I dabbed it on my chest/neck/face as I kept going, trying to keep my body temperature down. There wasn’t much shade to help me until I reached the top.

And I have to admit, that ski lift looked mighty tempting as I started the descent on the other side…

Instead, I daydreamed about snow and sledding down the hill.

Reaching the highway intersection meant hailing a car ride in. Apparently some people wait half an hour or more for a car to come past, but Jesus loves me. One pulled up literally as I was five metres from the road, and they took Thomas and myself down into paradise (aka. Wrightwood).

It was nearly 8PM by the time we had got into the car and made the five minute drive to town.

First stop for me would have been dinner. I’m glad the boys were there, having got dropped off thirty seconds before Thomas and I. They suggested organising where we’d sleep was more important, which I couldn’t really argue with.

We went to the grocery store, after a lady on the street told me they had a list of trail angels there. I love small towns! The cashier lady said that they no longer have a list as it hadn’t been updated in a couple years, but she’d call Jeff for us and he’d look after us.

It’s a weird thought that I went into a store, the cashier called someone and he was about to pick us up to stay at his house for the night. When is that ever a normal thing to do?! I guess it’s my normal now.

It’s also Maya’s birthday tomorrow!! (She’s not sold on Khaleesi, so I’ll call her Maya again until we find a better trail name). Birthdays away from home can be hard, but she and Dario are my peeps in our home here. I wanted to make it special.

Balloons, Oreos and red wine – I’d hitch back to the trail and be waiting for [whenever] they walked out.

Bit embarrassing when I went to pay, Jeff was waiting in the car, and I couldn’t find my wallet.

I couldn’t find my wallet.

I actually could not find my wallet.

It’s not like there are too many hiding places in my pack – I was just about certain it simply wasn’t there. I’m stoked past Naomi had the foresight to organise an emergency card and stash it in a different spot in the pack, but wasn’t so stoked that I had to use it.

Jeff was great, and his wife Cindy was so lovely and their house the cutest! We were given options of camping outside, sleeping in a bedroom upstairs, using the caravan out back or laying out our mattresses on the garage floor… Three of us went for the garage floor – myself, Speedy and Thomas.

The boys couldn’t believe I wanted to eat dinner before pulling apart my pack, but that made more sense to me. The wallet would either be there or not. Rushing and stressing wouldn’t change that fact – I might as well enjoy dinner. We had a picnic of bread, cheese, more Oreos, avocado, tomato, spinach… It was lovely.

And my purse was not in the pack.

Turns out, when I went back for that second lot of hotcakes I must have got so excited I just left it on the counter at McDonald’s. Oopsie daisy.

Tomorrow, I’ll figure out how to get back there and rescue it. Stressing about it won’t change anything, so here’s to piping hot shower, washing my hair and a good night’s sleep.