The chilled-out, anything goes vibe of Casa de Luna worked its way into the others and our morning was not rushed. It was the very opposite of rushed. I already knew I wanted a sleep in and that pancakes were being cooked right up until 9; I needed the sleep after yesterday and my feet needed to rest. Maya, Dario and Speedy had planned on being up for breakfast at 6 and off soon after that. A lazy morning got the better of them too.

Casa de Luna also included Hawaiian shirts everybody was supposed to wear while staying, and an art table to paint rocks. Of course. With getting in late last night and leaving today, I didn’t bother with the shirt, but Speedy ending up asking if he could keep his and he plans to hike in it! “It’s so breezy!” he reckons.

By the time we set off, packs on and bellies full of pancakes and coffee, it was nearing midday.

We still only hiked a couple of hours before stopping for lunch, though. The day was hot, my pace was slow with these shoes causing more and more grief, and all of us were more inclined to take our time today anyway. I was grateful.

With the lack of shade on the mountaintop, we made do with what we could find, and ended up sitting on the trail.

I guess we’d thought we started fairly late so there wouldn’t be many/any behind us… Oops. Whilst climbing over our legs and packs they did admit to doing the same before, so there were no hard feelings. 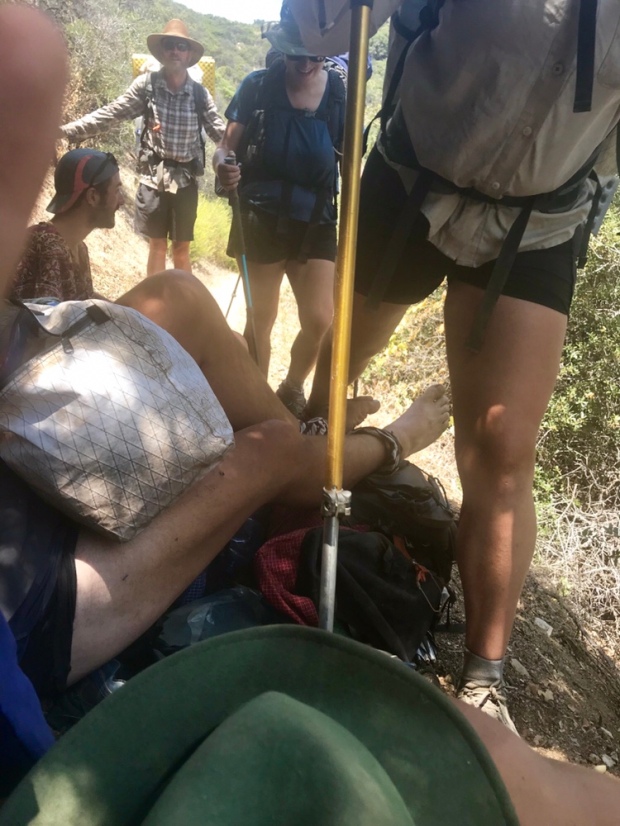 The day continued on for hours still, and I was slow. I was glad it was a beautiful walk.

Being unable to hike at my usual pace, I intentionally soaked in the views and nature around me.

For a long while, the path hugged a rock wall. Having my eyes and mind tuned in more finely this afternoon, the roots that grew out from the rock kept pulling my attention. 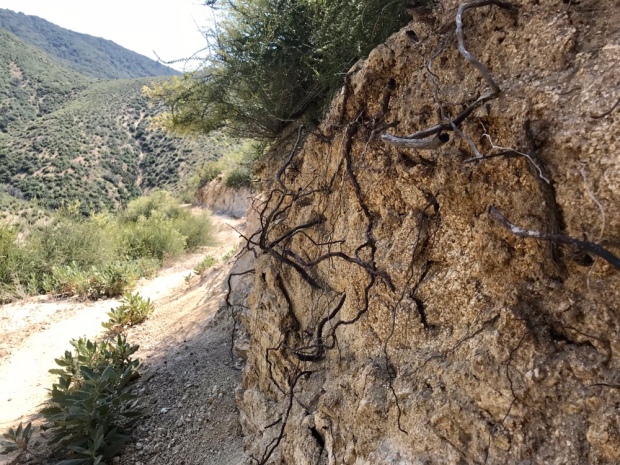 They gave me hope.

I know it might seem silly, but I felt my perseverance and determination rise as I walked beside them.

That seemingly impenetrable rock face gave way to root after root. These plants worked their way slowly but surely into something so strong and hard because they had just kept pushing and growing where they willed.

It would be the same with me. This seems impossible; such a huge, hard, feat to complete – especially with my body fighting me each step of the way – but with time, determination, and a tenacity to just keep pushing I can absolutely finish these 4,300 kilometres.

Thank you roots and rocks.

The next water was only a handful of miles away, but it took me more than an hour longer than the others.

Even with painkillers and gritting my teeth, I was struggling. I’d been worried about wearing in new shoes on trail even when I bought these, but the reviews of La Sportiva’s were pretty fantastic and I knew hey’d last a long while. A HUGE number of hikers wear Altras, a ‘zero drop’ shoe (which means the heel isn’t higher than the toe, like with most runners/hiking shoes), but they generally take weeks of getting used to so your Achilles don’t throw a fit and stop you walking. I like to go for more arch support as well, so I had opted with the La Sportiva’s – but was seriously reconsidering that choice now. Even with a wearing in period, surely I shouldn’t be hobbling this much?

I got to the water the minute the others were leaving. I’ve said it before: I wouldn’t have got this far without their kindness and support. They had already filtered water for me, left a bottle on the trail and a note that said they were carrying the rest to camp so I wouldn’t have to:

Lucky me, that this way is so flipping beautiful. 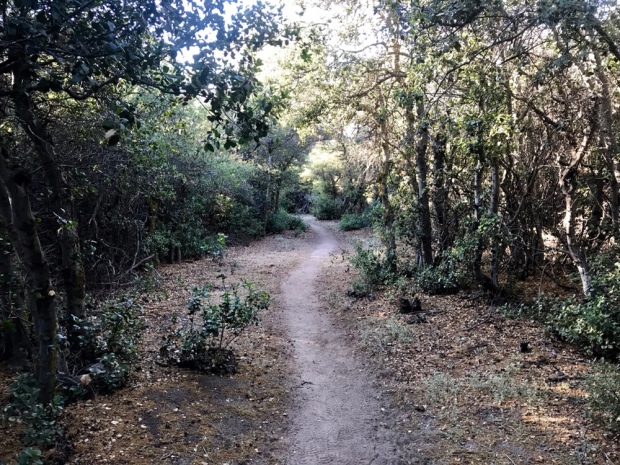