Today was the day that nearly broke me.

Yesterday, my feet were bad. By 6PM tonight, I could barely walk.

Maya, Dario and I left at 5:30AM so we would have a head start on Speedy and meet up 11km down the track at the 500 mile marker together for breakfast and photos.

I felt like I wasn’t even going to make it that far.

I hobbled in after them, almost in tears at the effort and pain of wrong footwear. The sizing isn’t wrong – technically, the fit seems perfect. My issue is more with the actual make of the shoe: the arch is too high I think, because I’m having pains up my arches, and then along the edges of my feet too (across toes and down to my heel), which keep shooting more pain into my ankles.

Those few extra millimetres on the arch nearly did me in today.

We sprawled out under some pine trees, and I was grateful Speedy wasn’t too speedy as we stretched and I massaged Vick’s into my feet, then elevated them a little. 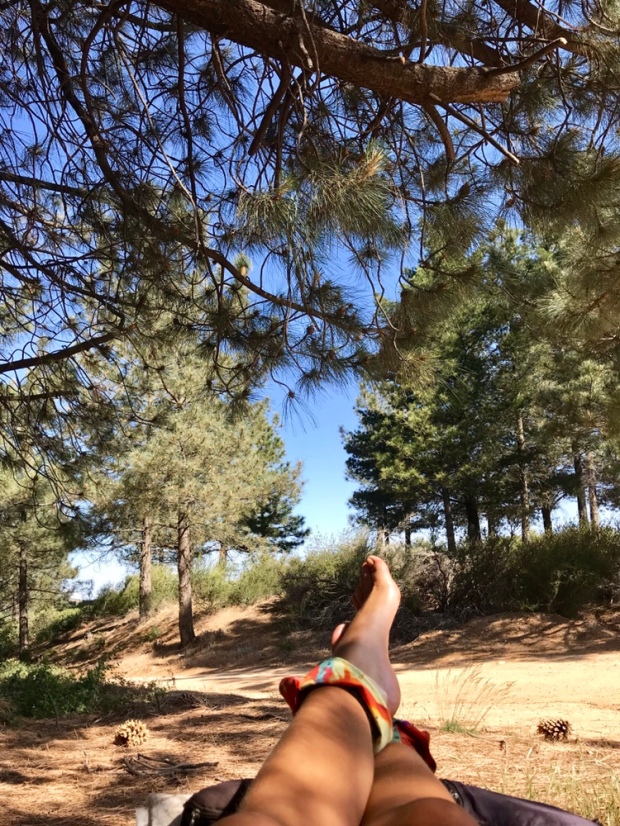 We’ve started calling Maya ‘Mum’. She doesn’t like it as a trail name, but for our little trail family that’s what she’s got now 😉 She looks after us all, she tells us what to do sometimes (like me zeroing in Wrightwood!), she sees sense where we might have silly ideas and it’s just funny to say, “Yes Mum!” “We love you Mum” “Sorry Mum!”. And she and Dario look after me big time. I don’t even think of this as a solo hike anymore, because I wouldn’t have gotten as far as I have without them.

Under the pine trees, Mum had one of her practical, genius ideas: how about I try their trail sandals? 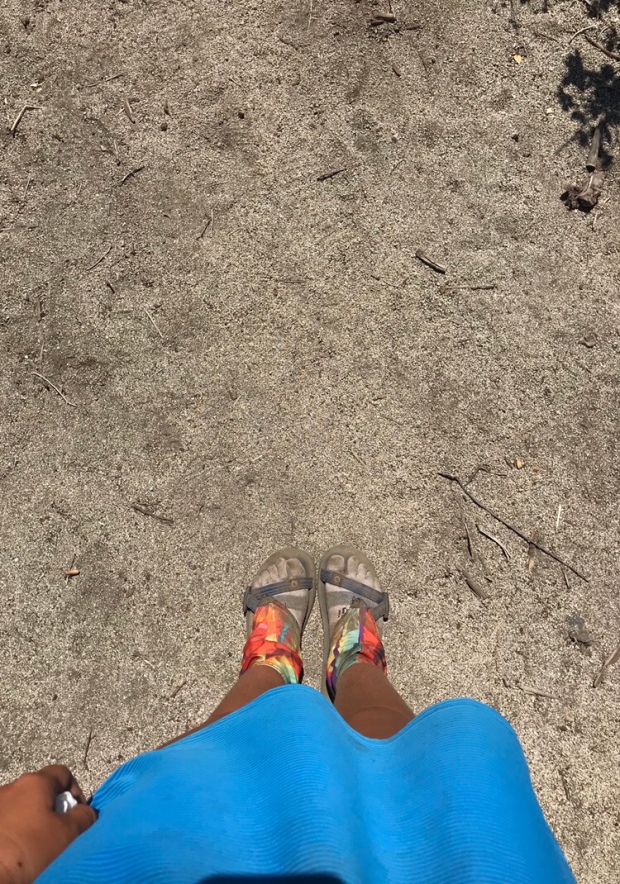 I kept my gaiters on with the hopes they were stopping some of the dirt getting trapped under my feet, but I’m not sure they actually did any good. Either way, those sandals felt like slippers. It was a beautiful walk up and down slow gradients, through wide grassy meadows, and past the 500 mile mark!

(Although Mum has the photos and wifi is a bit dodgy, so we’ll have to wait for me to add that one in!)

I still had aches running up into my ankles, but that was from bruising the muscles with the wrong fit – nothing I could really do about it here, right now.

I put some headphones in and just about skipped down the track, for a while. A little while longer than I had expected, actually. I can almost time how long it takes me to do different fractions of miles now, and this last stint to where we were meeting for lunch seemed to take longer. I stopped for a picture of the flat desert spread out ahead: that’s what we’ll be crossing in the next 24 hours, and checked my mileage.

I had gone nearly a half mile past the campsite.

My spirit was crushed, instantly.

It hadn’t been an easy half mile. There were steps that had to be carved in to the rock, because it was so steep. My knees have been friends with me again since I’ve started taking fish oil and stretching, but they were hurting with this climb down – and now I was facing that climb back up, and down it again after lunch.

I reckon if we were on a road and a car was driving by, I would have stuck my thumb out there and then and thrown the towel in. I couldn’t, though. I needed water: back there was the last water source for 15km so I had to stock up a few litres. And if I didn’t show up, the others would worry about me. With no reception to tell them I was having a meltdown, I had no real choice but to retrace my steps.

They all cheered when I finally ducked around the big pine tree that had shielded the campground table from view my first time, and wanted to know why if I had been walking before Mum and Dario, I arrived so long after them.

I had a few minutes sitting off to the side, rubbing my feet and letting a few escaped tears run down my dirty cheeks before I let them hug me better and sat at the table for lunch.

My lunch was two packets of ramen, a Snickers bar and some almonds. Dario – Chef, I think we should call him – casually diced up a clove of garlic and was sautéing it with sun dried tomatoes and pepperoni in olive oil while their pasta cooked… Next time, I might take notes from their grocery list and move past ramen and instant mashed potato.

We had a glorious nap and stretch together, and started down to reach Hikertown – me, for the second time 🙄I tried to keep my heart light as I hobbled along, but it was a losing battle, even with a mix of ibuprofen and endone to take the edge off.

There were nine more miles in total after lunch: three to the road, and six beyond that to Hikertown. By the time I reached the road, every step was a fight – both physically and mentally.

What hurt the most, though, was my pride.

I didn’t want to hitch. I didn’t want to skip any miles, or miss a section of the PCT. I wanted to conquer the challenge and walk the ENTIRE way to Canada, but I knew if I pushed too far I wouldn’t be able to make it to the other end of this desert, let alone across Oregon and Washington too.

I had to swallow my pride and the expectations I had put upon myself, and accept that right now, I needed help. And needing help is okay.

I tried Lyft (another American type of Uber).

No cars available in the area.

I tried waiting for 20min on that back road but not one car passed me, and the sun would start setting soon enough. Speedy had no reception up ahead, but I managed to get a message through to the Swiss, so they wouldn’t worry, and I started my long miserable walk up the road, in hopes of a passing vehicle.

Trudging on and on, the minutes felt like hours.

I was definitely in the middle of nowhere. Driveways were acres apart, with massive gates and no houses in sight; no idea as to how long those dirt driveways were, or if there would be any help at the other end even if I took my chances and walked up one.

Two fellas jogged around the corner and headed toward me.

I kept crying silently behind my sunglasses, and nodded back in reply to their nods as they jogged right past. Probably should have just asked for help… But I got my second chance: an hour later when they came back on their return (and I’d probably covered another kilometre further – no more).

They were the angels I’d been praying for.

After briefly talking (well, me crying), Mike kindly asked if there was anything he could do to help. Their car was an electric one and was charging; most likely, it wouldn’t be able to get me 2 miles down the road, and the hostel I was headed to was still 4.5mi away. He and Eric walked me to their home – mercifully, only another two properties down. They were sensitive and kind, asking questions and keeping conversation flowing naturally so that my mind would be taken from the pain.

We got to their place.

I hoped it was their place.

The massive gate was padlocked, so we climbed the fence to get in. I did briefly consider that these two men could have kidnaped me, murdered me, or worse. I was on a random road off trail in a foreign country and I’d have no chance of running away… But the agony shooting up through my feet confirmed to me that I’d take the chance. If they killed me, at least I’d be put out of my misery.

Their property had a couple houses on it – we walked up to the second one, and knocked. Alex was my third angel here. The guys explained to him my predicament: I’d walked 500 miles from Mexico, my feet just gave up today, and I needed a ride up to Hikertown.

I cried some more, and these were not crocodile tears. I was at the end of myself.

Mike asked if I was vlogging or keep an journal of this experience, and we all laughed together at the irony as I sobbed out, “Yep, my blog is beingjoyous.com”.

I was offered beer, and a frozen water bottle – gold! – and even a Labrabar (hiker food!), and their generosity broke me all over again. 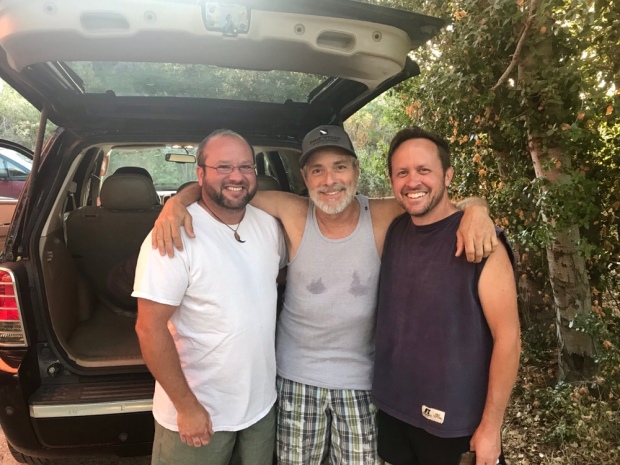 Speedy had already arrived at Hikertown, been to the store, bought burgers and wine and chocolate for us all, and it wasn’t too long before Mum and Dario got in too and they all hugged me tight.

Today was the day that nearly broke me.

It also left me feeling loved and revived by strangers, friends, and family alike.

I’m not throwing in that towel just yet.