I’m almost embarrassed even to write it…

BUT I PROMISE WE LEAVE TOMORROW MORNING!

Which, yes, means we’re on our fourth zero, but it’s the Fourth of July!

We needed the first zero for rest, the second for resupply, then it was the third, and the third of July – so naturally, we stayed for the Fourth. Of July, I mean. It makes sense.

We’ve been packing back on the pounds we’ve lost along the way. We call it ‘town calories’, where we channel hibernating bears and stock up on food and fat for our bodies to burn in the back country.

Today, for example, we had a feast for breakfast. Between seven of us: 27 eggs in a scramble, two heads of broccoli + two bags of spinach in a fry up, and a loaf of bread for toast. And a pound of bacon, give or take a few ounces. It was glorious. 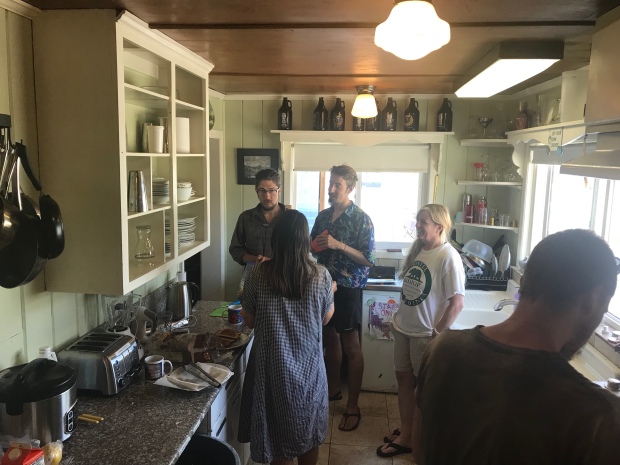 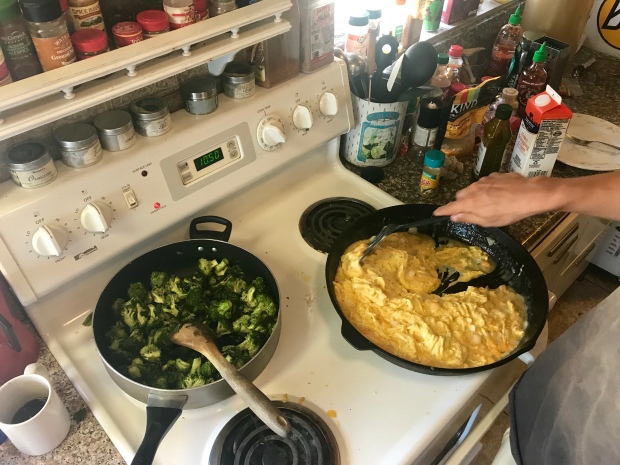 Cooking in a kitchen is fun. We feel a little more in touch with reality when we’ve got chopping boards, a fridge, spatulas, silver cutlery.

We also dressed up in party frocks (boys included) to get free pie at the local park for the Fourth celebrations, but they’d run out – so we had hotdogs at the bowling alley instead. Still super American! 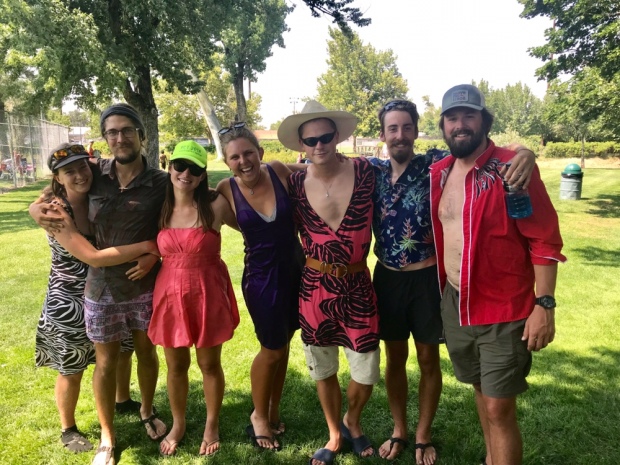 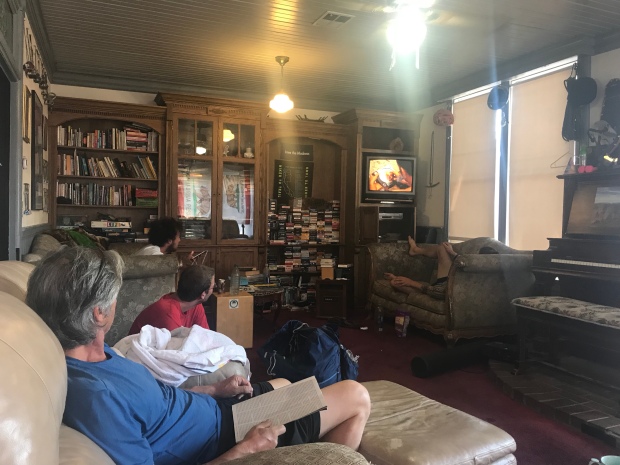 Sarah has been christened Jimminy Cricket. I was trying to think of a name to describe the little angel and demon that sit on your shoulders and whisper in your ears – because that is what she does. Sometimes, she gives me great advice, emotional support, a listening ear. Other times, she’s that little devious influence that whispers, “Do it!” It took a few conversations around campfires and tables, but Jimminy Cricket arose and Jimminy Cricket has stuck. 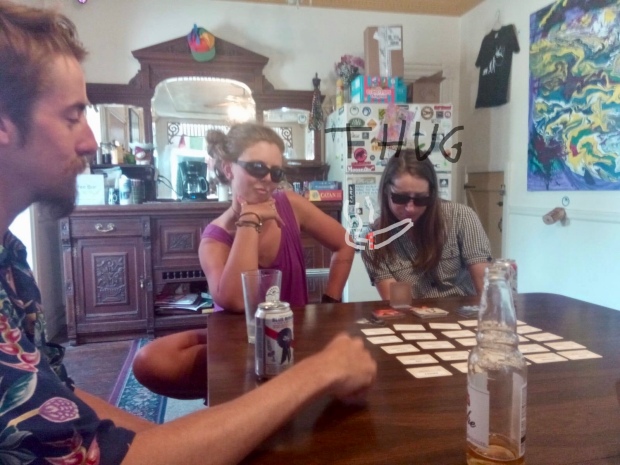 Jimminy Cricket made pavlova. We argued a little as the token Australian and New Zealand girls over who came up with the pavlova first, but our decision in the end was to hug and agree it doesn’t matter because we’re both awesome. 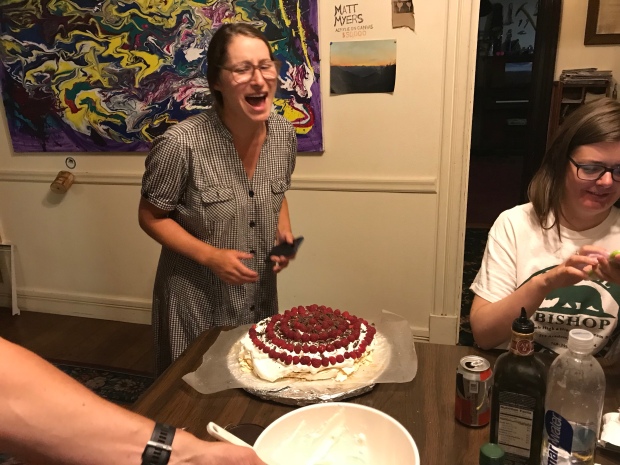 The Hiker Biker Gang has officially formed. When I herein refer to HBG, I’m referring to our little posse of badass ladies and strapping young men. 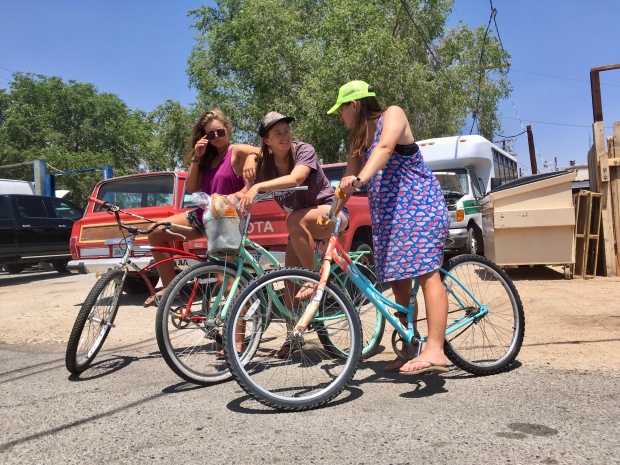 We’re not a trail family – this is a trail gang. The HBG, to be exact. 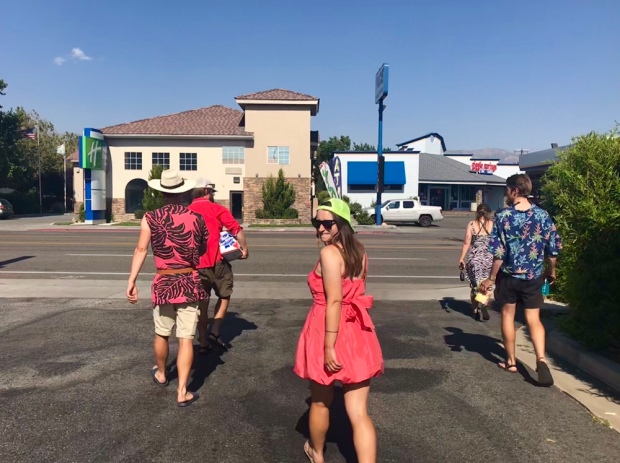 Oh and of course you all want to know about

Jefé did an absolute stellar job of piecing through my pack and explaining why I don’t need four pairs of socks: just wash my two pairs more regularly and swap them every day. Or why I don’t need my synthetic warm jacket: just layer up thermals and rain jacket – the waterproofing locks in heat probably better than my jacket, anyway. I don’t need deodorant: we all smell out here. I don’t need two pairs of tights: I’d wanted a pair to wear walking, and if they got wet in river crossings, have my thermals dry for sleeping – but he pointed out that I don’t want to be hiking in wet tights, to just stick with my bike shorts and ditch the second pair. I cut off two thirds of my groundsheet. I said goodbye to my trowel (there are plenty of sticks and rocks that can dig holes!). He even taught me tricks of the ultralight trade, like squeezing sunscreen into a ziplock bag! I’ve got to admit, the empty plastic bottle is heavy. And double bagging the sunscreen should be fine.

I fully committed to the shakedown.

Pickleback and I strode down to the local outfitter, he picked up a pack and said, “It’s a great company/bag, you still have some framework for your back, and it’s pretty lightweight for the support you get”. We strode back to the hostel, new pack in hand. It’s a whole kilo lighter than my previous pack!

So. The real question:

HOW MUCH WEIGHT DID WE DROP?!

Twelve flipping pounds. Five and a half kilograms.

My base weight (before food and water) has just about been HALVED – it’s now at thirteen pounds.

I’m going to be a new woman. 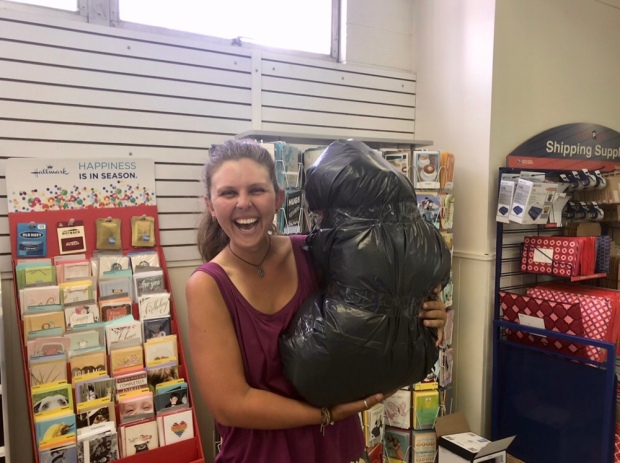 Hellooooooooo lightweight life. I’m going to be a new woman out there! 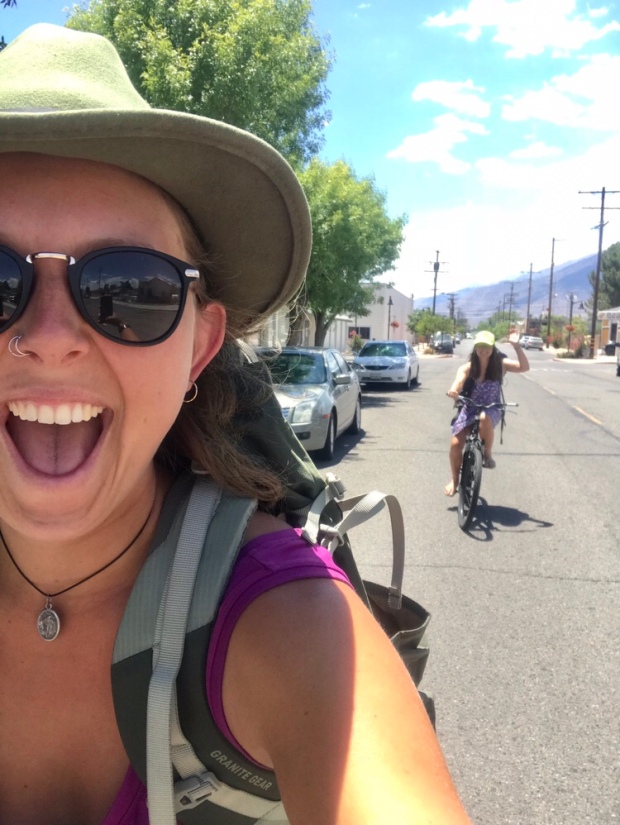 To end our time here, we watched some fireworks from the staircase. A few of our own firecrackers were even let off in the hostel square.

It was a good Fourth of July.

No parades like we’d planned, but this family fun time is worth it.

Not going to lie though: the trail is an intimidating thought, to have to face tomorrow.

After four full days off, I imagine this is going to hurt.

I also figured, having just hit two months on trail, some people may have only just joined the fun!

You can start the stories back at Day One right here, or jump to a month in with Day Thirty over here.

As always, it’s such a pleasure to have you share the adventure with me!

Don’t mind the expression; he was happy to be there.
Friday, my fam surprised me with a celebration cake for my first solo flight. I can only hope I’m always surrounded by people who love me so beautifully (ie. with cake).
This is my extra happy face because I’M A SOLO HELICOPTER PILOT NOW WHAAAAT • *Just to clarify: still have to finish my commercial licence, but I’ve got the thumbs up to whizz around by myself now 🚁 • 📸: @flywthchris