Even if I’m still not 100% sold on the idea of a PCT flip flop, I have to admit, this road trip has been a heck of a lot of fun!

I wish I had snapped a picture of HBG as they pulled into the driveway to pick me up from Redding: having Pickleback, Jimminy Cricket, Nemo and the Prodigal all jump out of the car and embrace me in a great big group hug was the best. It totally redeemed any leftover loneliness I had from craving a hug on Day Seventy Five, and filled up my love tank in the best way possible. The Hiker Biker Gang are my people.

Our first big stop (after a quick Thai dinner, a few hours rest in Eugene, and famous Portland VooDoo Donuts with fancy coffee for breakfast the following morning) was PCT Trail Days. And the first time I’ve set up my tent in a week.

Not a bad view, hey?

Trail Days is basically just a big gear expo for the Pacific Crest Trail. All sorts of companies come here: Guthooks Guides, LUNA Sandals, Big Agnes, Granite Gear, Osprey, Darn Tough, and soooo many more that the hiker world froths over. Me? I’m not so much of a gear snob. If you had asked me about the best shoes, or tents, or stoves five months ago, I would have sat beside you to scroll through the Google results – because otherwise, I had no clue. Now, although I’m a little more in the know with what’s what on trail, I still really have no clue. And I certainly don’t care about an exhibition.

What I do care about, however, is reunions.

And for those, PCT Trail Days was on point!

Even that photo up there of the stalls? See the fella in the pink Hawaiian shirt? He’s looking at me quizzically? The one I took a photo of and didn’t think anything of? Well… It wasn’t the first time I’d taken a photo of him: David and I were at Mile 1 together. Yep. The very first mile. I took his photo, and he took mine:

I told you Trail Days was reunion central!

With gear stalls on one side of the Columbia River and guest camping on the other, we hikers had a little island oasis all to ourselves.

It was tent city in no time, and a lot of fun! I swear, every time I walked back or forth, I would bump into another hiker I’d met at some point along the way. Realising that I may have only spent minutes, a few miles, or days with someone and then running into them here, in another state, month(s) later, and picking right up where we left off was a special thing. This bond we all share is priceless. My heart just kept getting fuller.

And then it just about exploded.

I was crossing the carpark, and Thibaud jumped out of a car in front of me. I last saw this boofhead on Day Sixty Four, just after we saw the bear. He was my person for a good chunk of the desert, then got ahead of us as we continued with our slower days, and we never saw him again. I had been trying these past couple weeks to talk him into coming to Trail Days. He was adamant that he wouldn’t come, and yet here he was. The universe is good to me.

I also met a guy called Flamin’ Hot. We hit it off right away, and walked around arm in arm as if we’d known each other for years. Apparently he had heard all about ‘Wizard’ from several hikers along his trip, including Maya and Dario. I didn’t realise until the next day, when talking to M&D myself (via phone – they weren’t here, sadly) that HE was THE Flamin’ Hot they had been wanting to set me up with! They’d been telling me all about this great guy that they thought would be a great match for me for weeks now. They also couldn’t believe that I had forgotten his trail name, met him, befriended him, and had had no recollection of their intentions. Turns out he is a stellar dude, and we laughed about it together (and sent them this selfie)!

We went out and had Bloody Mary’s for breakfast. 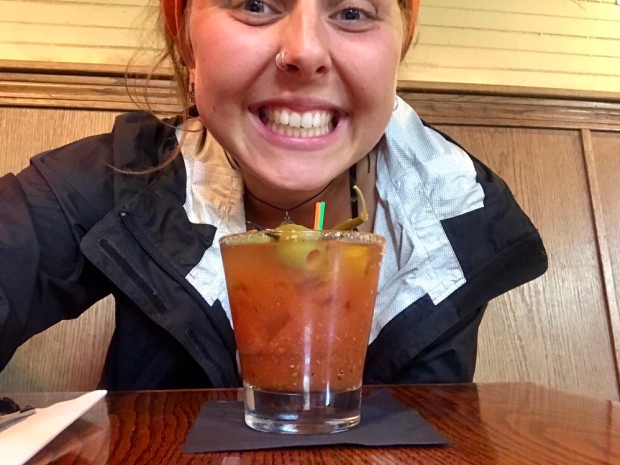 There was a street parade, complete with a ‘toilet water fountain’ trailer.

Smokey Bear himself made an appearance, and even threw us some candy. 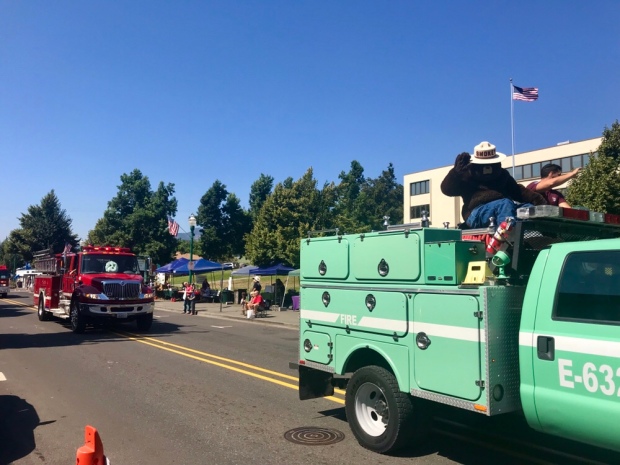 And all the festivities and merriment aside, my absolute most favourite part of this expo was having my trail family with me.

Of course, Maya and Dario and Speedy and Jefe and Songbird and Benjamin Button and countless others were very evidently missing.

But for the ones that I did have around me, they gave me a couple more 10/10 days to add to my list.

This is why I am here.