It’s been a while since I’ve stumbled across some solid good old trail magic, but the drought has ended at the cute little ski town of Stevens Pass.

Our little posse that keeps shrinking (and will shrink again next week – I’m still coming to terms with another goodbye) was in a rush to reach the Mountaineers Lodge in time for dinner. Our skipping along the bridge to cross Highway 2 and reach Steven’s Pass Lodge – and that holy grail of hot food – was borderline more of a run.

It wasn’t too fast, though, for my eye to catch an Isagenix logo on a lady’s backpack. And that chance meeting led to these two becoming my personal trail angels. 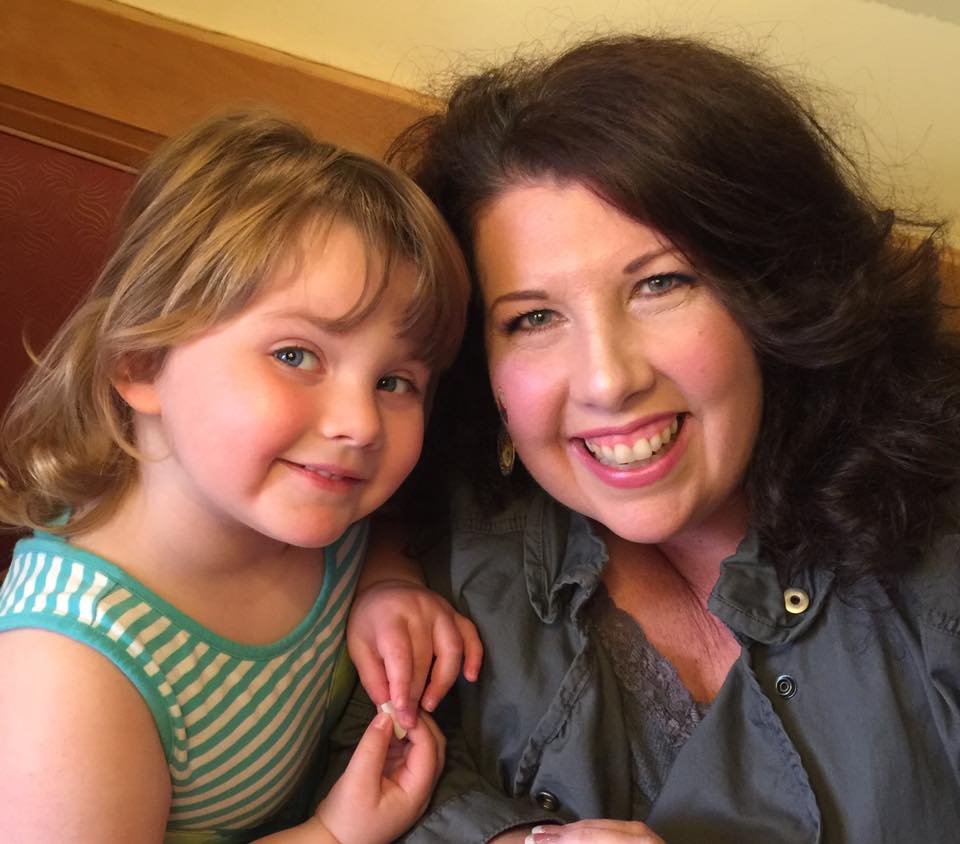 We had a quick chat about Isagenix – I used to be in the business with my Daddyo nearly ten years ago, and we did pretty well at it. I actually still drink the shakes and take the supplements when I’m at home, and have craved the nutrition out here on countless occasions over the past few months. That’s actually why I mix in Brekky Essentials to my oats for breakfast… Even though it’s more sugar than legit vitamins or goodness.

Anyway, her name is Joylene, my middle name is Joy. Her daughter’s name is Savannah, I have a best friend with a daughter Savannah. We had so many little commonalities, and connected quickly, sharing Facebooks and promising to keep in touch.

I have to admit, though, my mind was more on the food than new friends.

So it was a total surprise – the best of surprises! – to receive a message the following morning.

Joylene has gone through her cupboards and collected single shake packets, electrolytes, energy shots and greens powder. She offered to add anything else I might want or need in a care box: socks, lady products, anything! And for nothing in return. She just wanted to bless me – to bless my friends, too. She was super diligent with figuring out where to actually mail the box, where I might want boxes mailed to me along the way, and Savannah got in on the fun and drew some pictures for me on said box too.

I’ve said it time and time again, but it really just continues to blow me away how generous people are.

How much magic there is in the world.

How many treasures there are to be found, and how easy it is to reach out and make new friends.

And on top of all the goodness and positivity that came from meeting these ladies on the bridge Friday evening, our time at the Mountaineers Lodge was one of the best ‘town stops’ that we’ve had.

First off, they cooked for us, and it was a feast of goodies.

They baked cookies, they baked cakes, they whipped up pancakes, they made apple pie. This plate was full, but the cookies were hot straight out of the oven, and most people had either hiked out, or were napping… So, I didn’t want them to go to waste. Neither did Nemo. We shared them together, which still counts as sharing, right? 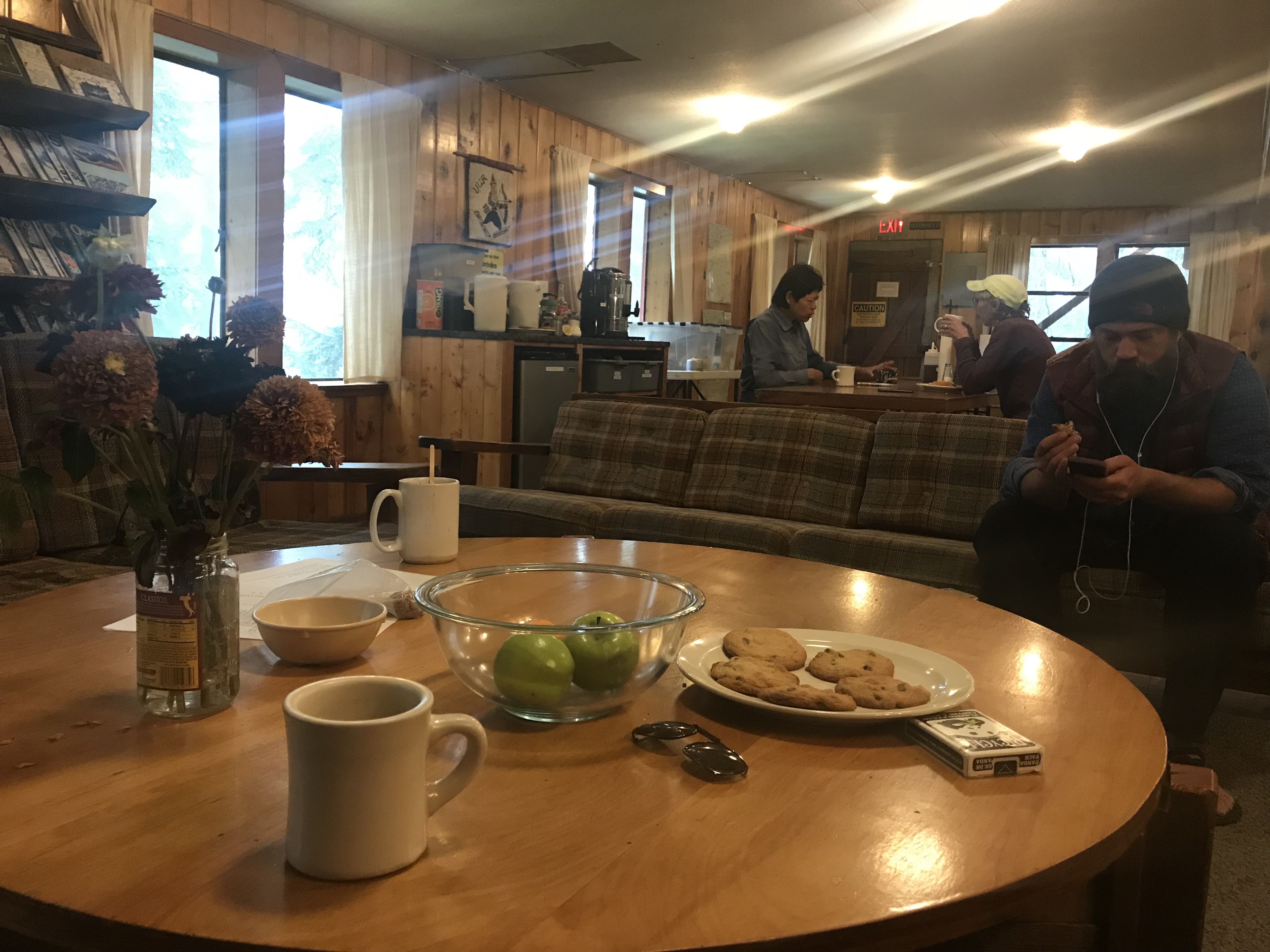 And then there’s Leavenworth.

We had to head down into the little bavarian town because I need knee braces (addicted to oxy is probably not the best way to finish this hike) and all of us needed to refill our gas canisters.

We got too caught up in the horse drawn carriages, the endless beer and pizza and cheese joints, and the wooden buildings, and somehow didn’t take any photos between the four of us. I had to google a picture to show you some idea of what this town is, because it legitimately feels like you’re walking through a fair or something, and that’s how it is YEAR ROUND. Even their McDonald’s and Starbucks are built in the bavarian theme – it’s bizarre and it’s glorious!

I know it would be hard to believe this could get any better than personal care packages, carrot cake and cookies and apple pie, and bavarian beer towns, but it could.

I’m a pretty competitive person on a good day. Sit me at a table of one of my best games with a friend who is equally competitive? Sometimes it goes a little beyond competitive. And also, sometimes it’s just easy to win FIVE OUT OF FIVE GAMES.

You all know the Prodigal.

Side note: I scrolled back through old posts right to the beginning, to read what I’ve written about him from the get go.

I spent my very first breakfast with him the morning of Day One. I saved him that night, too, when he stumbled in totally dehydrated (his 3L water bladder burst!) and cramping – giving him water and Vicks for the muscles and ibuprofen. I fed him dinner on Day Two when he stumbled in to that campsite, dehydrated and heatstroked all over again. I shared a meal with him at Mount Laguna on Day Three, and didn’t see him again until Day Eight – turns out he had GONE TO HOSPITAL, CAME BACK TO TRAIL AND BUSTED OUT NEAR 30mi DAYS TO CATCH UP. WHAT THE HECK BRAD?! That’s why I named him Prodigal: because he just kept returning!

This is our last town stop together.

He’s leaving, for good, a hundred(ish) miles from here. Come Snoqualmie Pass, we’ll have our last goodbye and I really will have to finish this without him.

It will be the strongest of all the bittersweet moments I think I’ll have lived out here. I’m stoked to have made such a dear friend who has shared so, so many memories, but it will be a hard farewell.

At least we’ll have to catch up again one day – I’m sure his pride will want another go at Rummikub.

I know it’s been a while since I’ve posted, so if you need to catch up, a few quick links are below:

DAY ONE: When it all began
DAY EIGHT: When the Prodigal gained his title… Sorry he didn’t actually make it to the blog!
DAY FIFTY FIVE: When I climbed the highest mountain in the contiguous US with Prodigal and friends
DAY ONE HUNDRED TEN: When we started hiking south, through Washington