Liza stopped by before we left this morning: not only with 2Beers’ phone and Nemo’s lighter, but with stickers and keyrings as little mementos. She went so far as to realise we were conscious of every gram we carry, but still wanted to give us something to remember her by. As if we could ever forget her, or her horse trailer, or the 100 odd kilometres she drove us down to town (and back!) for shoes and tights and a dry night’s sleep.

This woman is the real MVP: 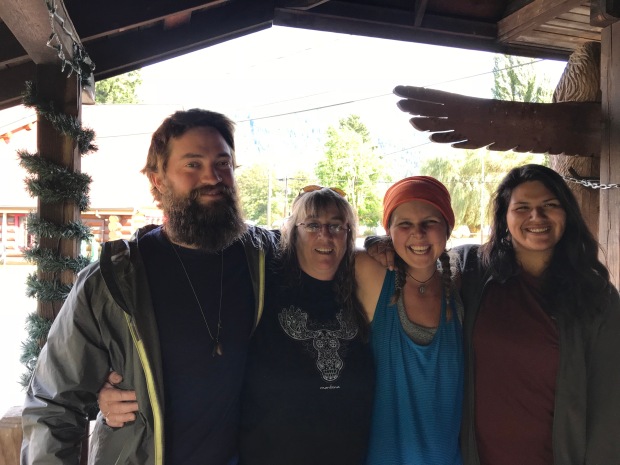 We did hike out of town eventually.

And look. I’m not actually sure if it’s exactly 8km we walked this evening, but it’ll do. At this point, the miles and kilometres don’t matter so much. They’re just  numbers. More numbers. We’ve had a lot of numbers.

The reason we weren’t sure of the exact mileage, is because the official trail is closed. There are two different alternates that hikers can take, and we’ve been asking almost every northbound hiker which way they went and what their advice is. None of it really gave us any indication of which way was the ‘best way’ to get up to the trail junction, so we figured we’d just wing it and hope for the best.

At least I’ve got 2Beers and Nemo with me.

I don’t really know how I would do this alone.

That’s been such a recurring thought these past months: that I came out here to do a solo hike, when in reality, I’ve been welcomed into one of the most tight knit, eclectic, loving communities I’ve ever come across: the hiking community. And I don’t know if it’s true or not, but I can’t help feeling that the people that have befriended me along the way and the ones I have walked with, or talked to, or camped near, or seen in town are the best of the best.

I mean, do all thru-hikers feel like this? Does every year bring such a gold mine of personalities and characters? Even if others argue that it does, I really do reckon I’ve found the best.

One of those ‘best’, Jefe, drew up a map that seems to have been shared from hiker to hiker and keeps cropping up. Someone shared it with us before we even realised that it originated with our friend, and it’s about the best we’ve got to go on for what to expect ahead:

Don’t worry. It’s a thorough map. What could go wrong?!

We’ve got to get to Coyote Trail Junction, which is where the Pacific Crest Trail picks up again. And it’s a coin toss between the quick, steep, direct route up there, or the longer, less travelled, more scenic riverside way.

10 points to anyone who can guess which way we took…

I’m never going to get sick of watching the moon come out and stars follow, or of feeling the cool of night start to creep in as the sun sinks down on the opposite horizon, or of hearing bugs and frogs and owls begin to wake up while birds and butterflies and most of the rest of the world starts to fall asleep.

I come alive out here.

I’m not sure if I told you, but when I ran into Griz a few days back, he told me to ‘hunt the hunters’.

Hunters think hikers are crazy. They think that hikers are out for Instagram fame, or because it’s ‘cool’, and often that hikers are inept at the outdoors and so focused on being the most ‘ultralight thru-hiker’ that they end up getting into trouble with the freezing temperatures and unpredictable storms. Plus, they’re angry that hikers scare off – literally, and often intentionally – the deer and elk that they’re out here to hunt for.

Meanwhile, hikers think hunters are barbaric. They think that hunters don’t actually care for the outdoors, or appreciate the earth. They think that they’re loud, obnoxious, messy, and have no regard for the raw beauty of watching nature do her thing.

No doubt there’s some truth to both sides, mixed in with a whole lot of misconception too.

So for my friend: the tour guiding, mountaineering, snowboard instructing, wise, knowledgeable hiker Griz, to say that he hunts the hunters, I was curious. I didn’t get it. He seemed like he meant that he was excited to see hunters on trail.

Turns out, he is.

Griz is not one to assume the worst in any person, hunters included.

He’s on the same wavelength I am: that most hunters aren’t bad people, they ust like to embrace the outdoors differently to how hikers do. And he told me that they’re almost always super generous if we give them the time of day.

Same with most people, I reckon.

So when we kept walking around this beautiful big lake, watching the moon rise both in the sky and in the reflection of the still water, and we heard voices, and smelled a campfire, and eventually saw a big tent, we three remnants of the Hiker Bang Gang simultaneously agreed to go introduce ourselves and make some new friends.

They shared their pancakes.

We shared our whiskey.

Everyone shared stories, and laughter, and the solidarity known to every group of people who sits around a warm, cracking fire, well fed and well watered and in company well spent.

Because (and I cringe a little out of anticipation for how this might be received by some…), I too, sometimes identify as a hunter.

Right now, of course, I would say I’m a hiker.

But I grew up hunting with my Dad: shooting rabbits and kangaroos and fruit bats and many, many deer.

And before you all up and close your browsers and swear off my blog for good: wait!

My Dad raised me not to hunt just for the sport of it. He doesn’t believe in wasting life. We’ve got a coolroom on a friend’s property, where we hang the deer, and turn the meat into steaks, sausages, burgers, salami, and even jerky sometimes. Deer are a major introduced pest in Australia, causing tens of thousands of dollars worth of damage to local farmers and orchards and businesses annually. By culling herds every year, we try to keep numbers down and maintain some sort of balance of native wildlife.
And, like I said, we eat them. No waste. No big ‘trophy kills’ just for a nice set of antlers.

Anyway, I don’t hate hunters. Depending on what time of year it is and where I am in the world, sometimes I’m one of them.

Tonight, I felt like we made new friends, who also love the outdoors; just in a different way to those of us who can take off six months at a time to live in the mountains/desert/forest/wilderness. Plus, they reminded me of my Daddy.

Small blessings like this mean so much out here. Small reminders of home go so much deeper. Small gestures of kindness feel a heck of a whole lot bigger than they would if I didn’t have the everyday, normal comforts of the first world stripped back and in storage at Mum and Dad’s house back in Sydney.

Or maybe it’s also that I’m just growing in gratitude, and sentimentality.

Maybe a bit of both.